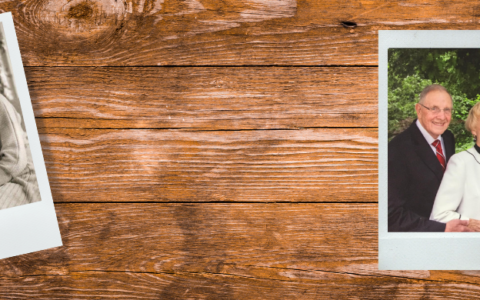 Gregersen and his wife, Evelyn (known as “Evie” to family and friends), had been married for 67 years when she died in August 2020 at age 87 from dementia-related causes. For most of that time, the couple was inseparable — Gregersen describes Evie as his “best friend” — but in 2016, he had to take the step of moving her into an assisted living facility, after he had cared for her at home on his own since 2012, when she was diagnosed with Alzheimer’s disease.

“I felt like I could no longer care for her at home safely, because she had lost her ability to walk,” says Gregersen, who is 88 and lives in Ankeny, Iowa.

From Daily Visits to No Visits to Socially Distanced Meetings

Even after Evie moved into the facility, Gregersen visited her daily and tried to be with her during all her meals. That routine ended in March 2020, when the facility caring for Evie had to close its doors to outside visitors. The couple celebrated their 67th anniversary with Gregersen standing outside the window of his wife’s room.

Starting in July, with the weather warm enough, he was able to spend time with her on the facility’s grounds, socially distanced and with both wearing masks and face shields. But pandemic restrictions meant they were able to do that only three times before she died.

Gregersen thought it would be easier to cope with his wife’s death since he hadn’t seen her frequently in her final months, but he was wrong.

“I miss her terribly, but I have so many fond memories of our life together, especially after I retired, when we traveled a lot, so we did things together,” notes Gregersen, who worked in advertising. “I guess what I try to do is treasure those memories and not dwell so much on the loss. I find that grieving is not just sadness and tears but it’s reminiscing. I think there’s a picture of her in every room of the house.”

Evie’s ashes remain in an urn on the mantel of the fireplace in the home they shared together, and when Gregersen dies, their two sons will inter them together at the Iowa Veterans Cemetery (he served in the Army). Evie was a lifelong Lutheran and an active member in their church (as is Gregersen), but her funeral service was limited because of the pandemic.

In part to make up for that, and to help him in the grieving process, Gregersen has tried to honor his late wife’s memory as best as he can. The family received more than 300 sympathy cards after Evie passed, many with donations for the couple’s favorite charities. Some of that money went to their church, and much of it was given to the Alzheimer’s Association in Evie’s name. Gregersen also volunteers with the organization, providing support for other caregivers.

In addition, the native Iowan has funded the installation of a bench in a local park. When it’s in place, it will have a plaque that reads “In Memory of Evelyn ‘Evie’ Gregersen, 1933–2020.” The spot is important to Gregersen: He rides his bike past it nearly every day.

That exercise has also helped him deal with the loss. “I try to bike year-round,” he says, adding that he has a blog called Bike Reflections on Facebook. “It’s my exercise, and it’s also a time to just clear my head.”

His Best Advice? ‘Stay Busy, and Try to Concentrate on the Pleasant Things’

The fact that this holiday season will be Gregersen’s first without Evie by his side isn’t lost on him, though. He plans to spend as much time as he can with his sons and five grandchildren, and he will “put out all the decorations, the same decorations that Evie and I would have put out, and I think that’s going to be good therapy for me,” he says.

That’s not all. “I like to bake, and if things turn out well, I’m going to share some of the treats with the friends and neighbors I’m blessed to have,” he says. “If I had to give anybody any advice who’s lost a loved one, I would say to stay busy and try to concentrate on the pleasant things.”

Resources for Caregivers During the COVID-19 Pandemic

For other caregivers negotiating these challenging times, the Alzheimer’s Association has a couple of resources, including Coronavirus (COVID-19): Tips for Dementia Caregivers, as well as a guide called The Holidays and Alzheimer’s during COVID-19.