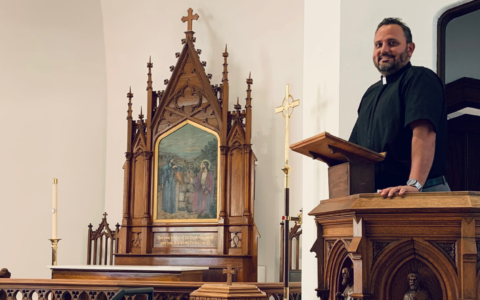 Sixteen months ago, we left the church unaware of how to endure a building project. We had to endure so much more.

In the book, Quiet Courage, Gil Rendle retells the story of Nashon, son of Amminadab, who was the first to enter the Red Sea as Pharaoh’s army pursued the Israelites. According to tradition, the people argued about who would first go into the water. As the anxiety grew and with no decision forthcoming, Nashon decided to courageously venture into

the unknown. When he entered the sea, the waters did not part. As he waded up to his waist, they still did not part. This continued until he took the step that would have put his nose underwater; then the sea finally parted.

In some ways, we can relate to Nashon as we find ourselves on the river bank waiting to cross over. Our shore does not belong to the Red Sea but the Jordan River and we are not fleeing the Egyptian army but crossing into a land flowing with milk and honey.

For us, we have been traveling through our wilderness. Of course, our journey was not 40 years long, like the ancient Israelites, but 16 months of being outside our sanctuary and 12 months during the pandemic. Along the journey, we have witnessed tremendous chasms within our communities over political, racial, and gender issues. We even grumbled along the way, mostly because of political leaders. And unfortunately, there was a lot of death along the way. Make no mistake, we went through a wilderness.

Now as we stand on the river’s edge we need the courage of Nashon because we are venturing into the unknown. Yes, we are moving back into the sanctuary but moving forward into a new church. We do not know what God is going to do with either the new or old space. We do not know what God has in store for us in the next few years. But there are some things we can be certain of, namely, God will continue to claim young and old in the waters of baptism, be present in the Lord’s Supper, forgive sinners, join people together in marriage, and resurrect our dead.

On March 28, we will celebrate Palm Sunday in the church. God will be with us on that day just as God was with us 16 months ago as we left the church. God was with us in our wandering and travels with us into the future. And the best part is that even if we lack the courage to move forward into this next moment, God has enough courage for us as we cross the Jordan. So get to feast on the milk and honey of the Promised Land.

We Mourn The Passing of Johanna Hansen

On Saturday, our beloved friend Johanne Hansen died. This is particularly difficult news to hear because even to the end her mind remained sharp and her convictions unwavering.

Due to the pandemic, Johanne thought it best to have only a graveside service. The service will be held at Glendale Cemetery on Friday, July 31 at 1 pm. When the pandemic is over, there will be a collective service for all our loved ones who died during this time.

Johanne will be dearly missed as she impacted many people through her many vocations: parent and grandparent, employee at Grand View, member of Luther Memorial, editor of Thorvald’s writings, and so much more.

Johanne also did a nice job correcting my spelling of Danish names.
Please take solace in the truth that as much as we love Johanne, she is now with her Lord who has loved her to the very end and has made her new.